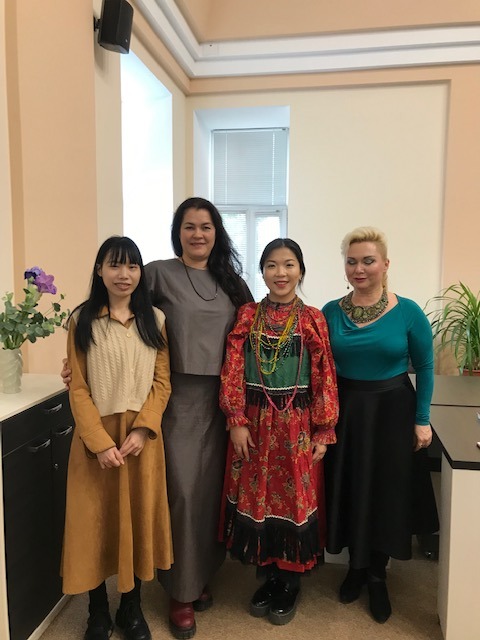 Cultural and educational online marathon for Chinese students "Learn the Russian language and culture" started at Penza State University on October 18. The project was designed for one month of interesting and intensive work of our teachers and staff with foreign students from October 18 to November 12, 2021. The programme was aimed at generating interest in studying the Russian language and culture among Chinese youth.

The marathon included not only a training course in the Russian language, but also a cultural block of workshops on the practical mastery of Russian traditional crafts and customs. Within the framework of the project, ten video films about traditional Russian crafts and customs were also shot. A textbook on RFL "We Learn the Russian Language" has been prepared for publication.

The results of the marathon were summed up within the framework of an international round table. The developers of the Russian language course for beginners, teachers of the department "Russian as a foreign language" Elena Peskova and Irina Krylova talked about how the work was carried out and how the Chinese participants coped with it. Alla Tarkhova, Head of the Department of Cultural Projects, PSU, emphasized that workshops on culture and crafts were a specific feature of the course. The workshops were conducted by experienced researchers of Russian traditional culture and masters of applied art. Olga Barabash, Candidate of Philological Sciences, spoke about the conceptual block “Images and Symbols of Russia”.

The round table that concluded the marathon was attended by the leaders of the Association of Chinese-Russian Universities "Volga-Yangtze" from the Russian and Chinese sides. The meeting was opened by Gleb Sintsov, Vice Rector for International Affairs, PSU. He greeted all the participants and thanked the partners of the marathon - the leaders of the Volga-Yangtze Association of Universities, the Russkiy Mir Foundation and IPR-Media. In his speech, he emphasized the importance and relevance of projects aimed at developing bilateral partnership with Chinese universities.

“Learning the Russian language and culture will not end with this project. I think that the marathon will become only a stage in a long way of cooperation between the two great powers,” said Gleb Sintsov.

Chi Jimin, Head of the Secretariat Office of the Association of Volga-Yangtze Universities from the Chinese side, Deputy Director of the Institute of Foreign Languages of Sichuan University, expressed her hope that in the future PSU will offer new joint courses in other subjects, such as economics, journalism, psychology.

Viktor Buyanov, Head of the Educational Programmes Department of the Russkiy Mir Foundation, listened to the reports of the round table participants and expressed his admiration for the high professionalism of the organizers and performers of the project “Learn the Russian Language and Culture”. Hu Nanton, a student of Yangtze University, Gao Ming and Bai Yong, students at the Central China Normal University, voiced their impressions of participation in the project.

“The methodological approach used in implementing this project is innovative. This is especially true now, when the implementation of offline projects is difficult. On the other hand, we were able to interest in the Russian language and traditional Russian culture a large number of Chinese youth who first began to learn Russian. In a fairly short period of time, they were able to master more than 250 Russian words, actively began to use 40 grammatical constructions and are already able to compose a short story about themselves. Many students are planning to continue learning the Russian language, and some of them even would like to continue their studies at Penza State University,” said Olga Meshcheryakova, the Project Manager, Head of the International Relations Office, Institute of International Cooperation, PSU.

The implementation of the project activities was carried out within the framework of Grant No. 2480 Гр /I-390-21 dated 13 September, 2021, by the Russkiy Mir Foundation. The project was carried out with the active support of the Volga-Yangtze Association of Chinese-Russian Universities and IPR-Media.